Schematic representation of paratransgenesis: transgenes encoding anti-parasitic molecules are cloned into a plasmid which is used to transform suitable symbionts of a vector insect. When the transformed symbiont is introduced into the gut of the vector, they colonize the gut whereas the anti-parasitic molecules they produce act against the parasites and clear them off. This image is from the open source publication Developing the Arsenal Against Pest and Vector Dipterans: Inputs of Transgenic and Paratransgenic Biotechnologies

Paratransgenesis is an interesting concept involving the genetic modification of insect symbionts with transgenes expressing secreted proteins that  alter an economically or medically important insect phenotype.  For example, an important application of this technolgy might involve creating mosquito symbionts expressing and secreting proteins with anti-Plasmodium activity which upon reintroduction into mosquitoes would result in Plasmodium-resistant insects.

There have been numerous examples of this concept being shown to be feasible, many coming from the laboratory of the authors of Wang et al.  So, creating bacteria secreting effective anti Plasmodium molecules is no longer a major problem.  The major problem is getting these genetically modified microbes to be widely distributed and maintained within mosquito populations. Wang et al. now report on their use of a species of Serratia (strain AS1) that can be transmitted vertically and horizontally in laboratory populations of Anopheles gambiae and An. stephensi so that 100% of the mosquitoes in the population are infected within two generations of the introduction of infected mosquitoes representing 5% of the population.

Wang et al. use a strain of Serratia they discovered in their laboratory colonies and upon marking it with EGFP and mCherry show that following introduction into the midgut with a sugar meal the bacteria remains in the midgut and also disseminates to the hemolymph, ovaries and testis. 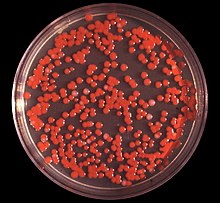 The authors demonstrate that these marked symbionts can then be transmitted to their progeny through mating and to non-sibling larvae by horizontal transmission via the water in which the animals are living.

The authors created a number of strains of AS1 containing a collection of anti Plasmodium effectors either singly or in combination and show that these have significant impacts on the intensity of midgut infections.

This is a very interesting paper that seems to bring the promise of paratransgenic approaches closer to fruition as tools for combating vector borne diseases.

An interesting feature of this approach is that it can be used to simultaneously reduce the vectoral capacity of multiple anopheles species in an environment whereas transgenic approaches would require solving the problems of creating transgenics from these other species.  Not necessarily and easy task.

The widespread presence of these genetically modified bacteria in water sources will elicit questions related to risk and safety but for now solutions to the transmission and sustainability problems are a significant advance.