It is well established that the RNAi response of Coleoptera and Lepidoptera differ greatly but less is known about the basis for these differences.  Skukla et al (2016) systematically investigated this question and report their insights in a recent paper in RNA Biology.

Coleopteran cell lines were sensitive to gene silencing following incubation with specific dsRNAs (3 genes were used as targets).  Lepidoptera cell lines showed no significant gene silencing under identical conditions.  One possible reason might be differential uptake of dsRNA by cells.  Using fluorescein-labeled dsRNA (~250 bp, GFP) uptake could be detected after just 30 minutes into both Coleopteran and Lepidopteran cell lines.  Using pH sensitive labels the authors found that dsRNA taken up by Lepidopteran cells in vivo accumulates in endocytic compartments of the cells.  The authors performed experiments to show that fluorescent signals observed were inside cells and not attached to the outside of the cells.

Although Lepidopteran cells take up dsRNA, did they process the dsRNA into siRNAs.  The short answer is “no”, according to the authors and this conclusion is based on experiments in which dsRNA was labeled with P32 and after being taken up by cells total RNA was recovered and size fractionated by electrophoresis.  RNA from Coleopteran cells had evidence of P32 labeled siRNA based on size while labeled siRNA could not be found among the total RNAs recovered from Lepidopteran cells. 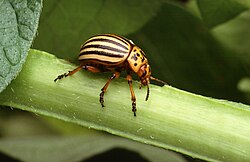 Similar results were obtained after feeding dsRNA to H. verescens and L. decimlineata.

This is an interesting report that enlightens us about the differences in RNAi in Coleoptera and Lepidoptera.  In addition to dsRNA degradation, it seems that a major difference is in the fate of dsRNA once taken up by Lepidoptera and Coleoptera.  In the case of Coleoptera the dsRNA is processed into siRNA whereas this appears not to be the case in Lepidoptera.