Bianca Kojin, Ph.D. is a Post-doctoral Research Associate in the Department of Entomology, Texas A&M University and is interested in the genetic transmission of engineered transgenes. More About the Author

First, indels caused by the traditional Cas9-induced Double Strand Breaks (DSB), second, the need of drug selection with the incorporation of drug-resistant gene into the genome and third the need to alter the balance of DNA repair pathways such as shifting NHEJ towards HDR or simply knocking down DNA repair genes that may cause genome instability.

In order to evaluate the extent of gene correction, Nakajima et al. devised a simple assay system where cells were able to express mCherry fluorescent protein but not EGFP, due to a nonsense mutation. Once the mutation is reverted, EGFP expression was then restored. 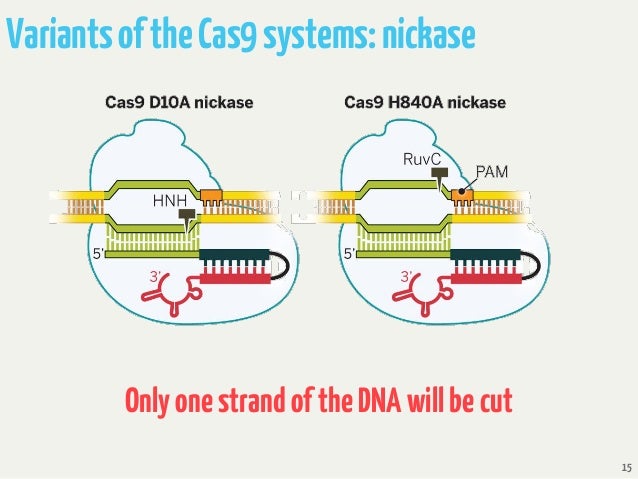 Cas9 variants that only nick DNA are available and differ in the strand of DNA nicked. Image from https://www.slideshare.net/Hub_lot/review-of-crisprcas-9

Using a Cas9D10A (Nickase) to create nicks on the DNA, the authors evaluated if tandem (TN) or single nicks (SNs) on either the sense strand of the mutated EGFP and the donor plasmid (containing the correct DNA sequence homologous to the EGFP gene) were capable to promote nucleotide substitution and restore EGFP expression.

They found that the efficiency of nucleotide substitution by a combination of SNs in either target gene and donor plasmid (SNGD) was equal or greater than that by tandem nicks. They also found that SNGD is able to correct the reporter gene with higher efficiency that a DSB causing less indels.

Nakajima et al. further knocked down important factors required for canonical homology repair (HR) in mammalian cells like CtIP, BRCA2, RAD51 and RAD52 to determine if SNGD utilizes the same pathway as HR. The results indicated that SNGD-mediated gene editing is independent of CtIP and RAD51 but is partially dependent on BRCA2; however, the depletion of RAD52 stimulated a more efficient nucleotide substitution.

Therefore, the authors concluded that SNGD might use noncanonical Homology Directed Repair.

Finally, the authors were able to apply SNGD successfully to edit endogenous loci and they finished the work correcting 1bp from a mutated endogenous enzyme supporting a possible application of this method towards gene therapy, which was their premise.

Although SNGD mediated gene-editing system presented here focus on gene therapy applications, it can be adapted for insects offering an option for a more precise and efficient method for gene editing involving nucleotide substitutions, additions and deletions.

More About the Author