Mary (Chaffee) Grantham is a graduate student in the laboratory of Dr. Jennifer Brisson in the Department of Biology at the University of Rochester. Her research is focused on the molecular basis of wing polyphenism in aphids.
MORE ABOUT THE AUTHOR

Thairu et al. (2017) report in Insect Molecular Biology their use of aerosolized siRNAs bound to nanoparticles to silence genes in the pea aphid, Acyrthosiphon pisum, while circumventing  the problem of rapid dsRNA degradation in the hemolymph of this species.

While whole genome sequencing has become common, a major obstacle for the field has been functionally validating gene annotations. Thus far, most annotations have relied on bioinformatic approaches using ab initio gene predictions and homology. Theoretically, RNA interference (RNAi) is a promising method to address this issue by knocking down gene expression in any eukaryote with short interfering RNAs (siRNAs). Experimentally, successful gene knockdown with RNAi methods have been limited to specific taxa and by inherent characteristics of the target gene, tissue target, and delivery method.

Aphids are a group that has proven difficult to use RNAi methods for gene knockdown, even though their RNAi pathway is conserved. In the pea aphid, Acyrthosiphon pisum, dsRNA has been shown to be quickly degraded in the hemolymph, resulting in inefficient gene knockdown (Christiaens et al. 2014).  Nanoparticles are reported to stabilize siRNAs and increase their uptake by cells (Li-Byarlay et al. 2013). 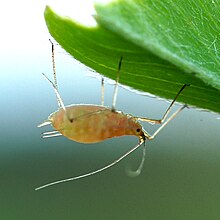 The bcat gene is important in the synthesis of leucine, valine, and isoleucine, which the aphid symbiont, Buchnera does not produce. This gene is present in all three aphid species and successful knockdown is expected to cause a reduction in body mass due to dysregulation of these essential amino acids. In A. glycines, a 30% knockdown of bcat was observed along with a significant reduction in body size with a 200nM concentration of bcat siRNA bound to nanoparticles. A knockdown of 19% was achieved with aerosolized siRNA bcat only, but no phenotypic effects were observed indicating a need for nanoparticles in successful cellular uptake. Regardless of the presence of nanoparticles or siRNA concentration, knockdown of bcat was unsuccessful in A. pisum and S. graminum and no phenotypic effects were observed.

Together this data suggests that the nanoparticles are necessary for cellular uptake and the nanoparticle may also stabilize the siRNA, preventing degradation. Aerosolizing the siRNA as a delivery method is also a non-invasive technique that can be optimized for a high-throughput gene knockdown study with greater reproducibility. Overall, the successful use of RNAi in aphids with aerosolized siRNAs bound to nanoparticles is exciting for future uses of RNAi in non-model organisms.