Mabashi-Asazuma et al. (2015)  report in Insect Biochemistry and Molecular Biology on their successful efforts to alter post translational glycolytic processing of proteins in the posterior silk gland of Bombyx mori.

This shows partially dissected silk glands from a last instar silk worm (white carcass). The relatively large size of the posterior silk glands and the abundance of protein expression and secretion make them a potential protein production platform. This photo come from wormspit.com an interesting site about silkworms.

The “silkworm is emerging as a new recombinant protein production platform with attributes such as the silk glands, which have the capacity for high-level protein production and secretion.” (Mabashi-Asazuma et al. 2015).  There have been much effort to modify and control gene expression in the silk glands of Bombyx mori so that they have enhanced capacities for protein production.  These earlier efforts however were generally not aimed at altering the nature of post-translational modification of expressed proteins.

Unfortunately silkworms do not produce proteins with glycosylation patterns seen in mammals.  So, while they may be capable of producing large quantities of protein, the proteins will not be fully mammalian-like and this may mean the difference between being effective or ineffective in the clinic if the protein has therapeutic potential. 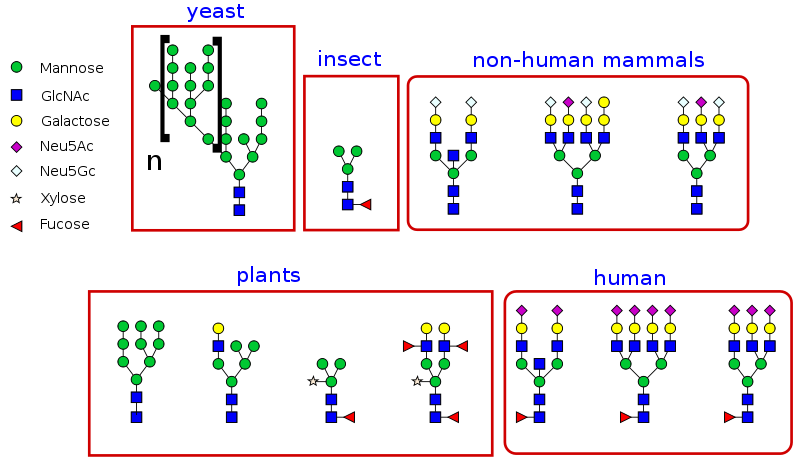 The authors approach this problem in a straightforward way.  They build a piggyBac transposon vector with two transgenes, each regulated by an identical copy of the promoter from the gene encoding the fibroin light chain (fibL), a major protein component of B. mori silk.  The two transgenes were mammalian N-acetylglucosaminyltransferase II (MGAT 2) and β1,4-galactosyltransferase (B4BALT1).  These two enzymes are expected to result in a mammalian N-glycan processing pathway in cells expressing them.

The basic strategy for using transposon technologies (piggyBac in this case). This image is from http://www.transposagenbio.com/ – a source of various piggyBac technologies.

The authors created transgenic silkworm lines using a routine strategy involving piggyBac vector integration and then proceeded to assess the glycosylation patterns of proteins found in the posterior silk gland were fibroin is normally expressed.

The paper should be consulted for the details of the data but in short their engineeering efforts appeared to be successful.  Proteins from the posterior silk gland did appear to have mammalian glycosylation patterns, further enhancing the potential of the silkworm’s silk gland to become a significant platform for the production of therapeutically active proteins.

There are other applications of glycoengineering besides producing human therapeutics and this paper may have broader interests because of that.