CRISPR/Cas9 gene drive has garnered much attention for its potential to be used as a biological control tool to mitigate or even eliminate unwanted invasive species but the topic of resistance development in target populations has tend to not be discussed as vigorously making a recent preprint in bioRxiv by Unckless et al. on the subject of some interest. 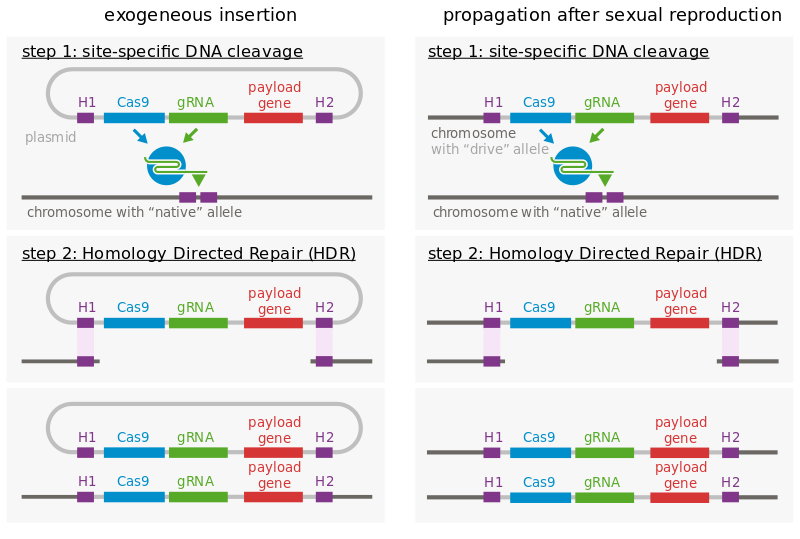 Basic Cas9 drive system being introduced into a genome and then ‘spreading’ within a genome. image by Thomas Julou (Own work) [CC BY-SA 4.0 (http://creativecommons.org/licenses/by-sa/4.0)], via Wikimedia Commons

Although the action of programmed Cas9 endonuclease is now well understood and its use in the creation of synthetic homing endonucleases demonstrably feasible the question of whether such a system could drive to useful frequencies in large natural populations in which there either may be resistance alleles within the standing genetic variation of the population, it arises de novo by mutation or is created through the action of Cas9 and Non Homologous End Joining remains unanswered.

Of course these questions are important because prior to any intentional release of a gene drive system we would like to have some idea as to whether it can be expected to work or not.

The authors look at the probability of resistance developing under a variety of conditions and from three sources, standing genetic variation, de novo mutation and imperfect end-joining following Cas9 cleavage.

They find that the overall probability of resistance developing is largely dependent upon Ne (effective population size), μ (de novo mutation rate) and δ (rate of imperfect non-homologous end joining).   They conclude that resistance is likely to evolve whenever θ > 0.1 and Neδ > 1 (when resistance has some advantage over the driver and the costs associated with the driver are not completely dominant).

Interestingly, according to the authors, these conditions are likely to be met in insects like mosquitoes – a longtime target of gene drive considerations.

NHEJ and Cas9. Cas9 can recut target sites repaired by NHEJ until repair results in mutants that make it resistance to the original Cas9/gRNA. The target site is now resistant to Cas9 cleavage using that gRNA. Image credit: by David Wyatt and Dale Ramsden on Addgene

One of many interesting observations and conclusions it that Non Homologous End Joining will likely have to be suppressed in order to help insure that drive will be successful before the development of resistance.  Alternatively, drive strategies might be devised in which mutations arising from NHEJ have the same phenotype as the drive allele or the costs of NHEJ are high enough to counter any advantages gained from resistance.

This is an interesting analysis that is worth reading that helps amplify the need for modeling and careful consideration of drive systems so appropriate performance characteristics can be designed into them and measured before releasing any of these control agents into target populations.