RNAi works well in beetles, in general, and why that is is not all that clear but Yoon et al. (2016) have begun to identify key genetic contributors in their recent paper in Insect Biochemistry and Molecular Biology.  The authors have taken a page from the Drosophila playbook by making excellent use of a Leptinotarsa dcemlineata cell line coupled with a quantitative assay for RNAi.

The assay in this case was built on dsRNA silencing of inhibitor of apoptosis (IAP), which when silenced, results in apoptotic cell death that can be quantified by assessing the number of live cells.  Yoon et al. used an assay for cell viability that could be conducted by taking absorbance readings using a plate reader. 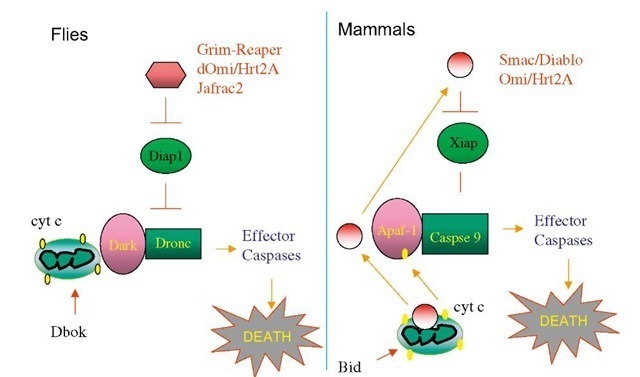 The role of IAP in Drosophila and Mammals. Image Credit http://what-when-how.com/insect-molecular-biology-and-biochemistry/programmed-cell-death-in-insects-part-3/

The logic of the assay is that if you silence genes involved in RNAi then the amount of dsRNA IAP silencing and cell death will be decrease.  In other words, you inhibit the inhibition of an inhibitor.  Clever and effective.

Using this assay the authors screened 50 genes that, for one reason or another, they reasoned might play some role in RNA interference.  The genes tested fell into functional groups including Core RNAi machinery, dsRNA uptake, Intracellular transport, Lipid metabolism, Nucleases, and Antiviral RNAi, RISC factors.

While these result were very interesting the authors took this a step further and asked what effects the expression of each of these 5 genes would have on RNAi in a cell line that naturally shows relatively weak RNAi responses, the Lepidopteran cell line Sf9. Interestingly, in the case of Ago1, Ago2b, Aub and Vha16, transient over-expression in Sf9 cells enhanced the cells RNA interference responses.

There are lots of details in the paper concerning the interpretation of these findings and their implications that are worth getting into and I highly recommend taking a look at this paper.