Synthetic gene drive system based on site specific DNA endonucleases (homing endonucleases, ZFN, TALENS, Cas9). Target sites and homology arms are chosen so that the endonuclease and associated genes (gRNA and other transgenes) are copied into homologous chromosomes.

Modeling gene drive, Drury et al. describe how the presence of pre-existing Cas9 resistance alleles within populations and non-random mating can have significant effects on the extent to which a driving element will successfully increase in frequency.

Advances in the uses of Cas9 and other RNA-guided endonucleases are resulting in the development of synthetic homing-endonucleases that can rapidly increase in frequency within populations. These so-called ‘gene drive’ systems have potential as pest control tools by enabling the rapid introgression of genetic constructs that either result in a reduction in the size of the target population or a modification of pest-relevant phenotypes.

Under what conditions and with what characteristics will these synthetic homing-based drive systems be success in reducing/eliminating or modifying the target population is an open and important question?

Drury et al. have used a model originally described by Unckless et al. and modified to incorporate the presence of homing-resistant target sites as well as non-random mating. 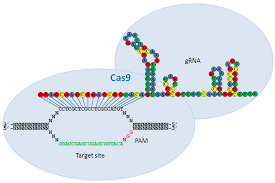 Cas9/gRNA interaction with genomic target DNA sequence. If there are polymorphism in the target sequence they could, depending on how many and where in the target they are, prevent Cas9 interaction and cutting of DNA

Resistance evolution is a major concern of those developing homing-based drive systems. Drury et al. consider the effects not of resistance evolution but of the presence of resistant target sites in standing populations of the pest insect. In this case the authors use natural variation in three potential target genes in populations of Tribolium castaneum as examples. The target genes selected were reasonable based on previous published data.

Our understanding of the population dynamics of resistance in insect populations has been well studied in the case of insecticide resistance. Under strong selection for resistance alleles, their frequency can rapidly increase in a population. This is true for resistance to ‘gene drive’ as well.

Furthermore they incorporate non-random mating into their model and explore if, when and to what extent inbreeding will affect the drive system. Intuitively, anything that reduces the number of drive system heterozygotes would be expected to have the potential to impede or slow the increase in frequency of the drive system.

The parameter space explored by the authors was more modest than some (e.g. Beaghton et al. and the authors considered homing systems that were very efficient and with either high or medium fitness costs. When the fitness costs of the driving construct was high (s=0.8) then the presence of resistant target alleles at a frequency of 1%, which was not unreasonable based on their empirical data in this case, prevented the successful spread of the drive system. With moderate fitness costs (s=0.40) and 1% resistance allele, the drive system would reach high frequencies and then rapidly be lost after about 60 generations. Others have reported similar findings.

Drury et al also looked at inbreeding and found that with an efficient drive system that has a high fitness cost (s=.8) an inbreeding coefficient of F=0.15 could prevent the gene drive system from spreading in the absence of resistance alleles. Adding fitness costs on top of the inbreeding effect significantly impeded or prevented the successful increase in frequency of the drive system.

The unique and potentially interesting aspect of the analysis of Drury et al is the incorporation of inbreeding into their model and their demonstration of its severe effects when coupled with high fitness costs of the drive system.

While inbreeding coefficients can be reasonably estimated, fitness costs are much more challenging so translating these interesting finding into drive system design and construction will be challenging.