Just published online in Nature Methods, Moreno-Mateos et al report testing the activities of >1200 gRNAs in zebrafish embryos and used the results to create an algorithm for predicting gRNA efficacy. 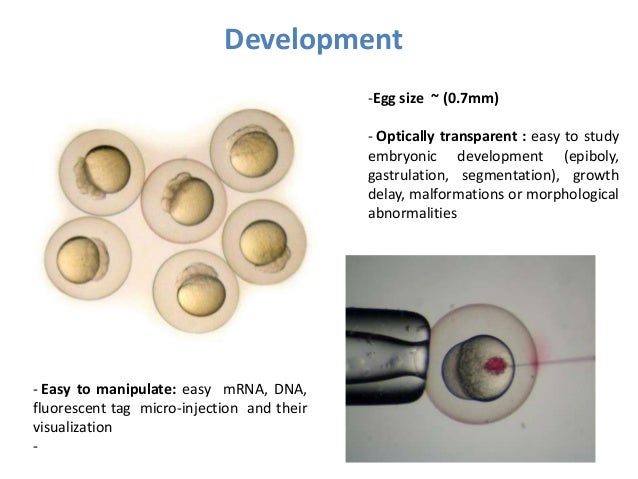 Image of zebrafish embryos and embryo microinjection. Image from http://www.slideshare.net/sandeepsatapathy11/zebrafish-model

Moreno-Mateos et al tested the activities of >1200 gRNAs by injecting pools of gRNAs into zebrafish embryos and assessing indel generation using high throughput sequencing.  They were able to assess the relative activities of the gRNA both between and within loci, from which they were able to develop a “best guide” matrix that could be used to predict gRNA efficacy.

The work by Moreno-Mateos et al is particularly interesting because it was done in the animal, rather than in cell culture as has been conducted for assessing best guide designs previously.

A summary of findings of this interesting paper showing the impact of nucleotides on sgRNA efficacy. See Moreno-Mateos et al for details

In their study, the authors conducted a pull down of Cas9 at 1.25 hours post fertilization (hpf) in zebrafish and subsequently extracted the corresponding gRNAs for cloning and sequencing. Using this approach, they were able to broadly classify the gRNAs into “stable” and “unstable” groups, where the stable group represented the guides that were more abundant at 1.25 hpf. Not only were some guides found to be more stable, they were also found to have higher mutagenic activity, suggesting a connection between stability and function. Of the stable guides, they observed a trend of being A/T poor, but rich in guanine (particularly the bases distal to the PAM and the first PAM-proximal base).

Based on their findings, they developed an algorithm that “scores” the predicted efficacy of gRNAs, which they call CRISPRscan, and they further validated the model against additional zebrafish genes and one in Xenopus tropicalis.

The manuscript further investigates the loading of sgRNAs onto the Cas9 protein, which reinforced a preference for guanine rich guides among stable sgRNA-Cas9 complexes.

Screenshot of CRISPRscan’s Home Page. www.crisprscan.org
To score a gRNA without a reference genome, use the “submit sequence” function, toggle the Genomic off-target to “No search”, and then paste your gRNA sequence + PAM + eight nucleotides up and downstream respectively. CRISPRscan assumes a 20-mer for gRNA, so the entire length of the sequence to test a singe guide should be ~39 nucleotides. Alternatively, simply paste your target sequence and scroll through the output to find the scores for your gRNAs of interest.

Their predictive tool is available at www.crisprscan.org, and along with additional gRNA design tools to scan for off-targets, CRISPRscan could be good method to predict “ideal” guides for testing.

Ultimately, the efficacy of a gRNA is best tested in the context of the target organism, however CRISPRscan could help narrow down the guides selected for such testing.

“CHOPCHOP”ing with CRISPRs and TALENs: A New Web Resource for Genome Editing Design