As molecular biologists working on non-model insects, we do live in exciting times! Thanks to rapidly developing genetic technologies, we can now move on from “laboratory super models” to study ecologically fascinating or economically important insects. Recent advent of Next Generation Sequencing (NGS) technology combined with RNA interference and genome editing has provided us with new tools to investigate non-models. With these technical advancements, thousands of genomes have been sequenced and previously unknown gene functions identified.

To eliminate issues associated with high heterozygosity during genome assembly, authors used a hybrid assembly approach. Sequences from both 454FLXPlus long reads and Illumina short reads were used to assemble contigs and further, Illumina long-insert mate-pair sequencing data was used to generate scaffolds. This approach yielded genome assemblies complete and reliable compared to other Lepidoptera genomes. Further, they also generated a linkage map (using RAD sequencing) from a P. xuthus cross and used it to assemble the genome into 30 chromosomes. They found that more than 50% of the gene families were conserved in butterflies and also found interesting evolution patterns associated with insect development and host plant adaptation in these two species.The authors also looked into the extend of sequence divergence among P. xuthus, P. machaon and P.polytes using genome wide analysis and found a total of 915 genes that showed divergence in all pairwise comparisons. 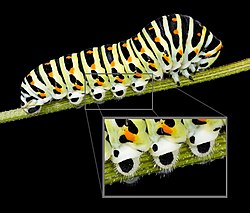 The authors also edited the genome of P. xuthus to create knock-out mutations using the CRISPR/Cas9 system. They conducted their preliminary studies with genes that have predictable and visible phenotypes, like Abd-B and ebony. Abd-B is a HOX gene associated with cell fate determination and null mutations or decreased expression results in development of extra prolegs on all segments posterior to the sixth abdominal segment in silkworm larvae. They were able to get high frequency somatic mutagenesis resulting in morphologically mutated individuals with severe but expected phenotypic abnormalities by simply increasing injection concentrations of single guide RNAs (sgRNAs) and Cas9 messenger RNA (see paper for details), along with shortening the time period from egg laying to injection. Mutated individuals showed curled abdomen resulting from abnormal terga on segments A3 and beyond, and most individuals had prolegs on all or part of segments A7–A10.

HOX genes in Drosophila melanogaster.
This is a public domain image found here

Li et al were also able to generate mutants for ebony, a gene that encodes the enzyme N-b-alanyl dopamine synthetase, a central component of melanin biosynthesis. Mutated fifth instars exhibited enhanced melanotic pigmentation as expected. They then went on to mutate the candidate diversification gene frizzled (fz) to identify the gene function in Papilio.

If you work with butterflies, or are interested in developing genomic resources and functional genetic tools in non-model organisms, this paper is worth the read!