In fall of 2014, two publications came from George Church’s group (Esvelt et al., 2014; Oye et al., 2014) postulating on the potential for the CRISPR/Cas9 system to be used as an autonomous gene drive for various pest management goals. Among their speculations, they offered possibilities for how CRISPR-based gene drives could be controlled or undone once released, and called for more thought to be given to the debate about whether such work should be done and how it will be contained if i

nitiated. This call could not have been more timely or prescient, since only a few months later Gantz and Bier (2014) published the creation of a de facto gene drive in Drosophila melanogaster utilizing the CRISPR/Cas9 system.

Gantz and Bier appear to have been developing their system, called Mutagenic Chain Reaction (MCR), to speed up the creation of homozygous mutants. MCR uses a homology-directed repair (HDR) construct that integrates both cas9 and a gRNA into the target site, allowing the insertion to perpetuate itself. However, they recognized the gene-drive potential of this method, so, in addition to demonstrating the efficacy of MCR in achieving their primary goal at the yellow locus, they also described efforts to prevent contamination of wild populations and lab strains. 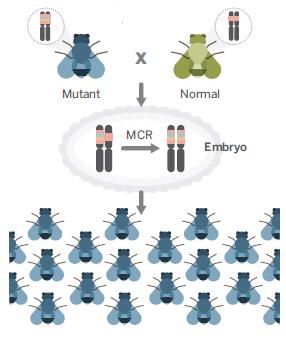 Strategy used by Gantz and Bier (2015) to create homozygous lines of Drosophila melanogaster involving the introduction of a Cas9-, gRNA-expressing construct flanked by sequences homologous to the target gene leading to the conversion of heterozygotes to homozygotes.

Recently, Port et al. (2015) demonstrated the effectiveness of a less risky method for rapidly producing homozygous-mutant flies. Called CRISPR with Independent Transgenes (CRISPR-it), this method crosses a genomically integrated cas9 expression line with an independent gRNA expression line to target a third genomic site for double-stranded break. Port and colleagues tested several existing cas9 lines to determine their efficiencies for germline and somatic mutations. Although the authors report significant variation between the different cas9 lines (presumably due to genomic position effects), they demonstrated the consistency of their results within any given cas9 line with multiple, independent guides targeting several genes, including some that are homozygous lethal.

Port’s report suggests their system is as efficient as that of Gantz and Bier for generating homozygous mutations, without the risk of autonomous drive. CRISPR-it is also effective at many sites in the Drosophila genome, while MCR has only been reported at one.

While those of us working with non-model organisms would like to have seen injection of RNA, or even protein, included in their comparison of efficiencies, the integration of cas9 certainly seems to be a tool worth pursuing for developmental studies.

Although MCR bypasses the need to create integrated lines, it does require a new HDR construct be made for each target. However, once an efficient cas9 line has been established, it need not be recreated for each CRISPR-it experiment, and integrated gRNAs are not necessary for the technique to be effective.

Most importantly, Port and colleagues demonstrate that we don’t have to risk MCR to achieve a high efficiency of mutagenesis using the CRISPR/Cas9 toolbox, so long as we are willing to take the time to optimize for our species of interest.

Towards a Medea Drive System in Anopheles Mosquitoes

The Road Ahead for Using Gene Drive Systems