Sally Ireri is a graduate student at the University of California, Riverside. She is investigating the piRNA pathway in Aedes aegypti and is using insect transformation technologies including CRISPR/Cas9.
MORE ABOUT THE AUTHOR.

A recent publication by Strecker et al., 2019, opens up the intriguing possibility that some transposons may be able to be guided to specific sites in the genome thereby overcoming perhaps the greatest hurdle that prevents them from being used as precise tools of genome engineering.   While this report focuses on the Tn7-like transposons of prokaryotes which are unusual in having two mechanisms of integration, one of which is site specific, it raises the question as to whether similar mechanisms may have evolved with other transposons. Working model for the TnsABC+D pathway from Kuduvalli et al. 2001Tn7 is a widely dispersed bacterial DNA transposon which integrates into the bacterial chromsome through two main pathways, reviewed in Peters and Craig 2001. The first pathway includes the protein TnsD which mediates insertion downstream of a recognition site, attTn7, found at the 3’ end of the highly conserved glutamine synthetase bacterial gene, thereby protecting the host genome from deleterious effects of random insertions. In this way, the transposon is vertically inherited by daughter bacterial cells. The second integration pathway involves TnsE and results in preferential insertion into other mobile genetic elements such as conjugal plasmids thereby the horizontal transmission and dispersal of Tn7.

CRISPR-Cas systems are canonically employed in adaptive immunity against invading viruses in a wide variety of bacteria and archaea. The defense strategy occurs in three sequential stages, namely: adaptation, which involves the acquisition of the target sequence into the CRISPR-Cas system, followed by CRISPR RNA (crRNA) processing, and finally interference (Peters et al. 2017). CRISPR-Cas systems have also been adapted for a variety of non-canonical functions in their hosts such as signal transduction and gene regulation (Faure et al. 2019).

The association between transposons and the CRISPR-Cas system has already been well established with the discovery of the evolution of a major component of the CRISPR adaptation module, Cas1, from self-synthesizing transposons known as casposons (Krupovic et al. 2017). The reverse has also been shown to occur, with transposons capturing components of the CRISPR-Cas system and encoding minimal CRISPR-Cas variants. Tn7-like elements found in Cyanobacteria such as Scytonema hofmanni encode a type V-k CRISPR-Cas system with a catalytically inactive effector, Cas12k, no adaptation modules and a functional crRNA processing domain. The transposon maintains the expected suite of proteins with the exception of TnsE and the presence of TniQ, a subtype of TnsD. 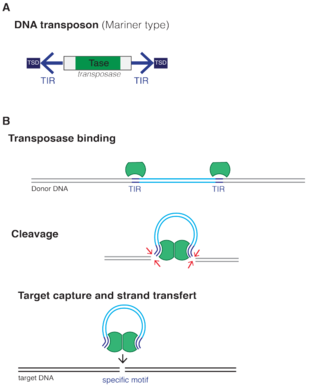 The association between Tn7 and the minimal Cas system has been proposed to assist this transposon in horizontal transfer. This idea is supported by the lack of TnsE which, in canonical Tn7 transposons, facilitates the insertion into other mobile genetic elements. Additionally, the endogenous protospacers found in the Tn7-like CRISPR array have been matched to plasmids associated with the same bacterial genera, suggesting targeting of the transposon to the mobile genetic elements.

The existence of CRISPR-associated transposase (CAST) led to the intriguing possibility of RNA-guided DNA insertion. This phenomenon has been elucidated by Strecker et al. 2019 in their recent article. The group first determined that the trans-activating crRNA (tracrRNA) and crRNA from two cyanobacteria were both transcribed using small RNA sequencing. The group then demonstrated RNA-guided transposition in vivo using a helper plasmid with the Tn7 transposition genes together with the endogenous tracrRNA and a crRNA targeting a synthetic protospacer, a donor plasmid with a kanamycin resistance gene between the transposon left (LE) and right (RE) ends, and a library of target plasmids with the synthetic protospacer and a 6N PAM. Co-electroporation into E coli resulted in insertion of the kanamycin resistance gene between the LE and RE in an orientation-specific manner with a preference for a GTN PAM. The same experiment was repeated with purified components to confirm in vitro RNA-guided transposition, and the inhibition of multiple insertions by the LE and RE was confirmed to occur in vitro as it does with canonical Tn7. The group determined that all components of the CAST were necessary for transposition with insertion occurring 60-66bp downstream of the PAM each time.

Perhaps the most fascinating discovery was the ability to program the CAST to target synthetic loci, with insertion of the 2.5 kb cargo occurring at a frequency of around 60%. While the insertion events occurred mostly as directed, off-target insertions were found mostly at genes with high rates of transcription, which is consistent with endogenous Tn7 recognizing highly expressed loci.

While the authors speculate on potential uses of this CAST system in gene therapy and genome editing, this discovery of RNA-guided DNA insertions could be an especially huge boon to insect genetic manipulation. Currently, CRISPR-Cas9 is used to insert foreign sequences into a genome via homology directed repair (HDR) of double stranded breaks, which operates at a lower efficiency than the alternative repair pathway, non-homologous end-joining (NHEJ) (Basu et al. 2015). Additionally, the insertion of large sequences requires homology arms of up to 1000 bp on either side which can prove problematic in insects with incomplete genomes. These constraints make genetic manipulations such as knocking in genes difficult, especially in non-model insects. Engineering of the CAST to function in eukaryotic cells would enable specific insertion of sequences up to 10kb as shown by Strecker et al. 2019, or potentially more and would also increase the range of unique sites that could be used targeted integrations, perhaps at high frequencies. The possibility of a suite of transposon-CRISPR systems that could be strategically deployed and tailored to insect species is something to contemplate.

MORE ABOUT THE AUTHOR.

This piece was co-authored by Peter Atkinson, PhD