Justin Overcash is a working on his Ph.D. in Dr. Zach Adelman’s laboratory at Texas A & M University  More About the Author

Häcker et al 2017 reports the use of Cre/lox Recombination-Mediated Cassette Exchange (RMCE) in Aedes aegypti providing a pathway for interrogating specific genomic locations for the use of transgenic constructs in future genetic control methods. Häcker et al 2017 first generated five lines for the basis of the study, the first four with eye specific 3XP3-DsRed expression as well as DmelPUb expression of AmCyan (F1, F2, M1 & M2). While DsRed expression via the 3XP3 promoter was identified, the DmelPUb promoter failed to express AmCyan suggesting it is not functional in Ae. aegypti. The fifth line, expressed both DsRed and AmCyan via the 3XP3 promoter (M30).

Once lines were established, Cre mediated recombination was attempted in 2 of the first four lines generated, with the intention of replacing the DmelPUb-AmCyan portion of the construct with a functioning 3XP3-AmCyan cassette. Both the F1 and M2 lines were injected, with the F1 line yielding integration but not exchange in 6 separate families or one third of the pools isolated (estimated recombination 5.5%). The M2 line also yielded integration but not exchange in only one line (estimated recombination 1.5%), suggesting that integration rates depend on the cassette location within the genome. Additionally, the M30 line was injected, in two separate experiments, with a 3XP3-EGFP recombination cassette to test wild type loxP compatibility with the mutated loxP (loxN) sites used in the generation of the above mentioned lines, zero recombination events were observed. 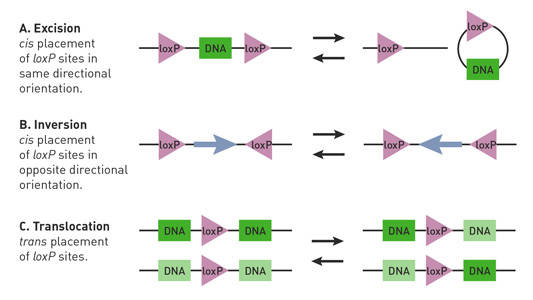 The Cre/Lox system has proven valuable for a number of applications that involve moving defined segments of DNA around in genome. Image Credit: JAX Notes from the Jackson Laboratory. https://www.jax.org/news-and-insights/2006/may/the-cre-lox-and-flp-frt-systems

Furthermore, all lines were evaluated for impacts on fitness with fecundity, fertility, larval development time, adult longevity and male mating competitiveness being assessed. Only one line (M1) failed to be competitive with the reference HWE strain and the F1 line was recommended for future genetic modifications.

In summary, Häcker et al 2017 shows that the Cre/lox system is a viable alternative to highly specific endonucleases such as the CRISPR/Cas system for testing transgene expression in Ae. aegypti if utilized in a two-step fashion. It also allows for evaluating landing sites for possible future use in genetic control mechanisms.

More About the Author