Unckless et al (2015) have done some simple modeling of Cas9-based drive systems and show that they behave as expected of ‘gene drive’ systems in general and Akbari et al (2015) make some suggestions concerning safeguards to consider before one actually assembles such a system.

An example of how a Cas9 drive system might work.

By linking transgenes expressing Cas9 and an sgRNA, and attaching to those transgenes sequences homologous to the genomic sequences flanking the sgRNA’s target sequence, one creates, essentially, a homing endonuclease.  The Cas9/sgRNA cassette will be copied into ’empty’ target sites and will continue to do that until there are no empty target sites left (it will fix in the population).  Cells heterozygous for this construct are converted to homozygotes and Gantz and Bier (2015) recently created such a synthetic homing endonuclease in D. melanogaster and showed that it behaved as expected, at least under the conditions under which they looked at the system.

Using a Wright-Fisher model (non overlapping generations) Unckless et al (2015) explore some of the dynamics of such a system.

The model used was fairly simple and included the conversion efficiency (i.e. how efficiently heterozygotes are converted to homozygotes), fitness costs associated with the drive system (selection coefficient) and the degree of dominance of those fitness costs.

Cas9 based drive systems, depending on the efficiency of conversion, can spread to fixation quickly.  This is the case even when the system imposes a cost on the host, regardless of whether those fitness costs are dominant, recessive or additive.  The dynamics change and it is possible to reach stable equilibrium as well as unstable equilibrium under some conditions. 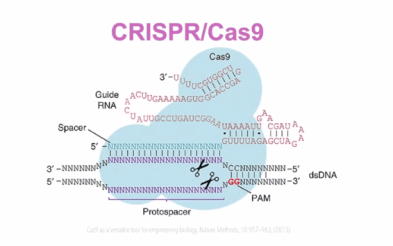 Interesting things happen when conversion efficiencies and fitness costs are similar, as you might expect.  But what is notable is that substantial fitness loads can be tolerated and the system can still have a reasonably good chance of going to fixation.  For example, even when the selection coefficient is 0.45 there is about an 80% chance the system will spread to fixation if it has a modest 40% conversion efficiency.

This is an interesting paper because of its timeliness and underscores in quantitative terms the need to think carefully before one decides to assemble such a system.  Akbari et al (2015) have written a short essay that makes some broad suggestions to those considering actually assembling such a system.  These suggestions are likely to be part of a larger discussion of Cas9-based drive systems and how to develop and work with them safely so that unintended spread through naive populations is prevented.