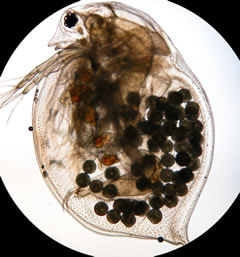 Naitou et al (2015) have recently published a paper describing their use of TALENs in Daphnia magna and make some interesting observations that could be relevant to those planning on targeted mutagenesis experiments in insects.

The water flea Daphnia is a model organism for animal ecologists and genetic resources have been steadily accumulating.

Not unexpectedly, gene editing tools are being tested.  Last year the senior author of this paper published results reporting their use of the CRISPR/Cas9 system in Daphnia magna (Nakanishi et al 2014).  Here they perform similar experiments using TALENs.

They make a couple of notable observations.

First, they found that when they used TALEN pairs in which the Fok1 endonuclease domains were identical and therefore capable of forming homodimers following binding of both TALENs to their target sites (Fok1 acts as a dimer and therefore two closely spaced TALENs are needed), 100% mortality of the Daphnia embryos was observed.  In fact, even when they injected either one of the TALENs alone, they observed high mortality.  This kind of homodimer effects associated with wild-type Fok1 domains has been observed before and it is speculated that it might be caused by off-target cleavage events.  Homodimer architectures are not recommended for Fok1 with TALs or ZFNs.

Naitou et al (2015) remade their TALENs using the same DNA binding domains but used two Fok1 variants – so-called ELD and KKR variants.  These new TALENs resulted in heterodimeric Fok1 that did not display any of the severe lethality observed using homodimers.  Not only did they observe high rates of survival following egg-injections (25%-65%) but their rates of mutagenesis were high (~75%-80%).

Interestingly, the authors  used CRISPRs to mutagenize the same target in some work they published in 2014 (Nakanishi et al. 2014) and this allowed them to compare each of these editing systems.  For these targets and under their conditions the heterodimeric TALENs significantly outperformed CRISPRs.

This was an interesting short report and it is worth noting that the Daphnia system and how these various technologies are delivered to eggs very much resembles what insect biologist encounter doing similar things.