Bill Reid, Ph.D. is a postdoctoral researcher in the laboratory of Dr. Alexander Franz in the Department of Veterinary Pathology at the University of Missouri, Columbia where is is studying mosquito/arbovirus interactions and the application of insect genetic technologies to the control or elimination of arbovirus transmission.
More About Author

In a recent PNAS publication by Buchman et al (2019), the authors report on the establishment and validation of transgenic Aedes aegypti containing a synthetic anti-ZIKV cassette, capable of conferring complete refractoriness to the virus.

piggyBac transposon integrates into the genome of Ae. aegypti at TTAA sites. Each site can be influenced by the “position effect” of where the transposon is inserted, thus researchers test multiple lines to validate that the transgene is effective independently of position effect, or to identify the best insertion site. Image from addgene.org by Amar Singh and Mathew Goodwin from Transposagen. 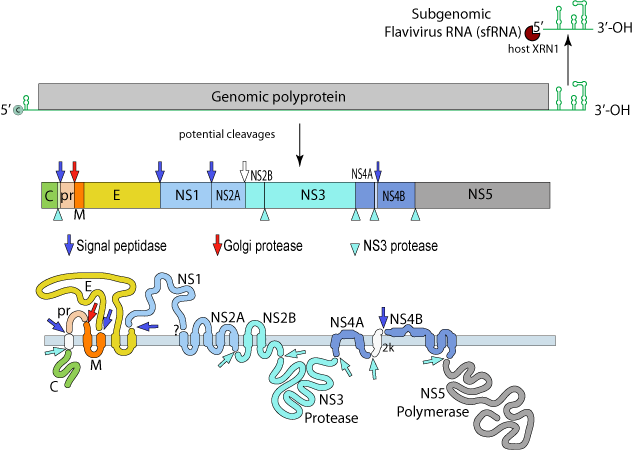 Figure 2. The genome of ZIKV consists of ~11kb of +ssRNA, including NS5, which encodes for a methyltransferase that a 5’ RNA cap, and an RNA-dependent RNA polymerase, which initiates the RNA synthesis. Image from viralzone.expasy.org.

Modeling of ZIKV infection in both Vero cells and in Stat-/- mice demonstrated a significant decrease in midgut and carcass infection, and also a decrease in prevalence in saliva.

The authors note that if the construct is linked to a gene drive system, it could be used to push the anti-ZIKV allele as homozygous through a population of Ae. aegypti, resulting in a population that is completely refractory to ZIKV.