Adriana Adolfi, Ph.D. is a postdoctoral researcher University of California Irvine Irvine, where she is working on gene drive-based population modification strategies in Anopheles mosquitoes MORE ABOUT THE AUTHOR

The ability of effectively targeting and disrupting gene function is essential for gene
functional analysis studies in mosquito vectors and has major applications in control of diseases such as malaria.

The authors performed a systematic assessment of the mutagenic efficiency of the CRISPR/Cas9 system in three Anopheles vectors of malaria. To do so, they targeted the X-linked white gene which upon destruction of both alleles (recessive) confers a white-eye phenotype. 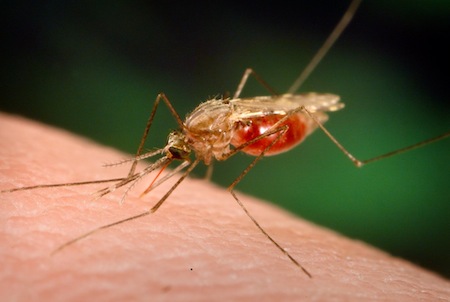 To determine optimal amounts for injections, Li et al. co-injected An. coluzzii embryos with increasing concentrations of sgRNA and Cas9 and found that higher concentrations were positively correlated with mutagenesis efficiency but negatively affected embryo survival.

Based on these findings, 120 ng/µl of sgRNA and 300 ng/µl of Cas9 protein were chosen to transform An. albimanus and, for the first time reported, An. funestus embryos.

Injections were successful in all species with An. coluzzi and An. albimanus showing a comparable survival rate that was higher than that of An. funestus, likely due to differences in egg morphology.  CRISPR/Cas9 was found to be very efficient in cutting both alleles in diploid cells as high frequency of G0 males and females with mosaic eyes was recorded in all species. Yet the rate of bialleleic mutations was dependant on the sgRNA used, suggesting that accessibility of the target site and choice of intramolecularly stable sgRNAs are of great importance.

To determine the efficiency of germline mutagenesis, inheritance of white eyes was
investigated in all species by crossing mosaic G0s with an established An. gambiae white- eye line and/or by intercrossing mosaic G0 siblings. All species produced high rates of mutant progeny (45-86%), confirming high frequency of mutagenesis in the germline.

Finally, to confirm the presence of indels causing loss-of- function of the white gene, the T7 endonuclease I assay (T7EI) was found to be a rapid and convenient method for mutant screening. Using T7EI, the presence of off-target mutagenesis in three alternative genomic loci was also excluded validating the high specificity of the system.

Taken together, in this work Li et al. describe the high efficiency and specificity of
CRISPR/Cas9-mediated mutagenesis in Anopheles mosquitoes and propose the following protocol for the generation of stable mutant lines: