The IGTRCN’s 2016 Technical Course began on Sunday afternoon, July 24 with the arrival of 24 students from Brazil,  Denmark, United Kingdom and the United States to the University of Maryland College Park, Institute for Bioscience and Biotechnology Research’s Insect Transformation Facility (ITF).

Channa Aluvihare from the University of Maryland Insect Transformation Facility explaining the fine points of preparing insect embryos for microinjection. Ali Afify from Johns Hopkins University and a ‘student’ in the IGTRCN Technical course explains to the group his research interests and plans for using insect genetic technologies.

Sunday afternoon began with an orientation and introductory meeting in which attendees briefly described their interests, the insects they work on and their plans to incorporate insect genetic technologies into their research projects.  This was a casual meeting over pizza and refreshments that enabled everyone to introduce themselves in preparation for a busy week

Monday morning, the class began in earnest with students receiving instructions and watching demonstrations by the ITF’s Rob Harrell and Channa Aluvihare on the fundamentals of embryo microinjection including needle manufacturing, embryo preparation and injection.  Embryos of Aedes aegypti were used as a model. 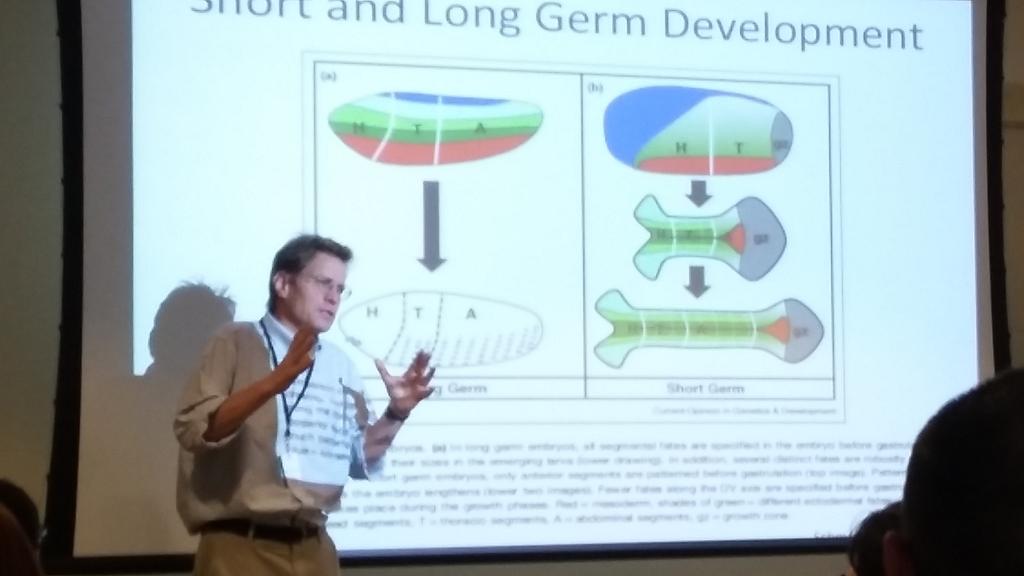 Urs Schmidt-Ott from the University of Chicago and an instructor in the IGTRCN Technical course lectures on insect embryology. At the end of Day 1 of the IGTRCN Technical course student were shown how to assemble a simple and inexpensive embryo microinjection system.

At lunch the students attended a lecture by Urs Schmidt-Ott from the University of Chicago, on insect embryology.  Knowledge of insect embryology is helpful in considering microinjection strategies for delivering genetic technologies. The day ended with a joint exercise in which Rob Harrell led the students, who were grouped into teams of 4 students each, through the construction of a simple microinjection system that is assembled from readily available parts that can be purchased for about $200.  The purpose of the exercise was to empower students with knowledge and skills that will help them tackle and solve technical challenges they will undoubtedly will face in developing systems for delivering various genetic technologies to their insects of choice.