Dan Hahn, Ph.D. is an Associate Professor at University of Florida Gainesville, FL USA and is interested in ecological and evolutionary physiology, physiological and genetic architecture of adaptation and applications of stress biology to biological control.  MORE ABOUT THE AUTHORS

A recent review by Darrington et al. (2017) sets the stage for a suite of novel RNAi-based approaches to help extend the applicability of SIT to many more pest species. The sterile insect technique (SIT) has been successfully used for decades against major pests like screwworm fly in North America and suppression or exclusion of the Mediterranean fruit fly in many countries worldwide.  In theory, SIT could be developed for any insect that could be colonized and mass-reared in the lab. Yet, a hurdle for programs is that SIT works best and is most economical when rearing and releasing only males.

Females are needed to maintain breeding colonies, but the ability to conditionally kill unnecessary females early in development would provide major cost savings and make male-only releases easier. Sexing strains with conditional female lethality have been developed for some pests like Mediterranean fruit flies using classical genetic methods, for example translocations of temperature-sensitive lethal rescue loci onto the Y chromosome. However, the classical genetic approach is laborious and difficult to quickly adopt for new target species. Mass rearing for SIT would be even more economical if genetic females could be conditionally converted into functional males. Furthermore, this problem of sexing is not only important for traditional SIT, but also for incompatible insect technique by Wolbachia and other autocidal approaches where releasing only males is important (e.g., RIDL-based approaches for mosquitoes).

Darrington et al. (2017) provide a useful overview of RNAi responses in insects and express strong support for a conceptual framework using exogenously delivered RNAi against female-specific, sex-determination transcripts to disrupt sexual development and convert genetic females to functional males by reviewing the current empirical work. But, getting rid of females is just the first step. Darrington et al. (2017) also advocate using RNAi to sterilize the subsequent males, effectively cutting out the ionizing radiation step, which when overdone can have dramatic negative effects on sterile male performance. 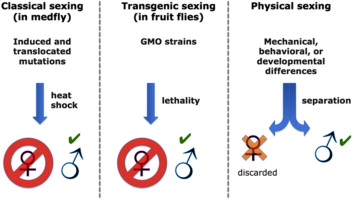 Several groups have successfully exploited sex-determination pathways to convert genetic females to males and/or diminish male fertility in pest insects using transgenic (e.g., Schetelig et al. 2016, Li and Handler 2017) or RNAi-based methods (e.g., Whyard et al. 2016, Ali et al. 2016). The ability to simply feed colony animals RNAi targeted towards sex determination or fertility transcripts is indeed a compelling one because it could be conditionally implemented and also avoids many of the regulatory and societal hurdles associated with releasing transgenic insects. Of course, any methods for sexing or sterility induction will need to be appropriately scaled to mass-rear millions of insects per week to be effective in operational SIT programs, and any new methods must be both effective and economical. Yet, as concerns about the use of traditional chemical pesticides grow worldwide, reviews like Darrington et al. (2017) nicely point out that we are hopefully on the precipice of a new era where genetic technologies are making their way out of the hands of laboratory scientists and into practical pest management.

MORE ABOUT THE AUTHORS